ADRIFT: In Search of Memory... a glimpse into the seafaring adventure... 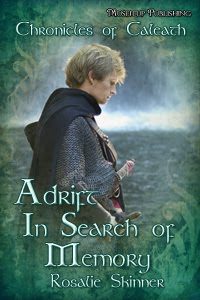 Chapter One/scene one
Saturated beneath oilskins, Captain Ed Brasheer spluttered through a mouthful of rain. Breathing the salt ridden wind, he braced when his small ship rolled and bucked against the heavy seas. 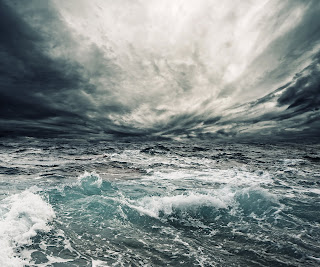 Sea water sluiced over the bowsprit. Waves crashed through the scuppers, from bow to stern.
“By Orthcan’s shoal and the tides of Marnain, I’d give anything for a change in luck,” Brasheer shouted, as fate tossed his storm battered vessel on a wild ocean. The deck shuddered before dropping from the crest of another wave. 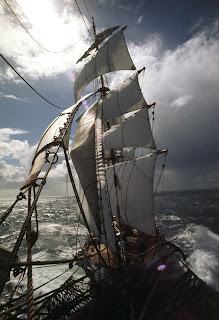 Above the tumult, the groan of stressed timber alarmed the skipper. The forward mast bowed against the force of the wind and threatened to splinter. Lashed to the helm, Brasheer ground his teeth.
Rain and wave fought to shred storm-set sails. He lifted tired eyes as a bolt of eldritch lightning speared through dark clouds.

“Careful what you ask for, captain,” his first mate shouted. Wind stole the words from Toby’s chapped lips. “You never know who’s listening.”

“If we lose another mast before the season ends, this storm will ruin me.”

Both men staggered as the ship drove her bow into another wave. The deck tilted. Again the bowsprit dug deep. For a heartbeat, Brasheer’s whole world turned on end as water washed across the vessel’s waist.

On the forward yard, a sail shredded. A crewman screamed, falling when the sheet whipped across his face. With one foot caught in the rigging, the man swung above black water. Brasheer held his breath, afraid his vessel would spear into bottomless depths. His heart pounded. Another wave broke beneath the hull, thrusting The Petrel’s stern high into the air.

“Get him down!” He fought to hold the ship straight into the next set of waves. “Look lively. The wind has died a little.”

“No, sir, it’s died a lot!” Even over the creaking hull, driving rain, and raging sea, Brasheer heard a note of anxiety in his first mate’s voice. The storm didn’t seem to frighten Toby as much as the tempest’s sudden demise.

“What have I done?” All around Brasheer, rain eased and furious seas settled. He refused to believe one impulsive plea could change destiny. An eerie light cast unnatural shadows across the sodden deck. “We’ve ridden through the worst, Toby. Bilge and blisters, we survived.”

“You mean our luck changed.” Toby’s words made the captain shiver. “I’ll see to getting Crimp cut down and treated.” The first mate’s face gleamed white in muted light dispersed by heavy clouds. He pointed to a bedraggled body strewn across the forward hatch. Brasheer didn’t remember the figure being there earlier.

“What ill wind or providence would dump a stranger onto our decks in weather as foul as this?”
Brasheer shuddered. Fear gripped him as he looked into the green underbelly of storm-ridden clouds. Untying his oilskin cap, he shook his head. “I dare say we are about to find out.”

A rumble deeper than thunder drew his gaze toward the heavens. His eyes widened and his jaw hung agape. 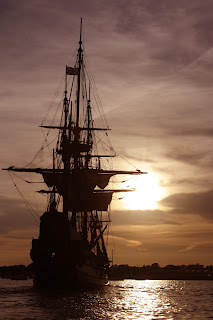 He pointed a shaking finger toward a silver object floating in the sky, high above the tallest mast. Larger than the fishing boat yet hovering motionless, the glowing hulk struck terror in Brasheer’s heart. “Have you ever seen a creature as strange as that?”
Toby glanced skyward, as intense light engulfed The Petrel and the flying machine vanished from beneath the clouds. “Silt and seaweed, preserve us.”
* * * *
photos, other than cover image, courtesy of Fotolia.com
Posted by Rosalie Skinner at 9:31 AM