Footballers, my short story is available on my website www.authorsden.com/laurellamperd
The short story was published in the West Australian Newspapers thirty years ago. It was one of my first stories published. I was thrilled to bits. Sadly, the West doesn't publish short stories and poetry anymore. It's what I like about the web. you can air old writings again.
Below is a short excerpt.

Kenny saw his father’s football trophies in the cupboard set high on the kitchen wall. Tarnished with black smudges, the silver cups gleamed dully in the afternoon sunlight shafting through the kitchen window.
"You'll be up there one day too, fella," his father would say as he gave one of the silver cups to Kenny to hold.
Kenny ran his fingers over the writing. "What does it say, Dad?” he’d ask though he knew it by heart.
“Best Player in Southerners Football Team,” his father would say. 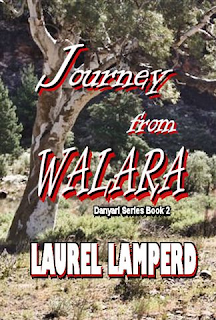 The second book in the Walara series. Danny and Will Hennessy join up in WW2 leaving their father, Jack Hennessy to manage the huge Walara sheep station
The book can be purchased as a download from www.barnesandnoble.com
Posted by Laurel at 12:01 PM