Thanks to Geoff Woodland for his fanastic review of my last book, Journey from Walara.

After reading Wind from Danyari I had to read the sequel, Journey from Walara, by West Australian author, Laurel Lamperd.
The Hennessy boys go to war, Danny to England to be trained as a bomber pilot, and Will joins the Australian Army and is sent to New Guinea. The story begins in the time of innocence in Australia of 1939. The author showed me the lives of people in outback Australia of that time, and how their innocence changed as the war progressed.
Lamperd has the knack of describing the conditions of north west Australia to such an extent that she has my mouth dry from wind blown sand, only to be washed clean in the next chapter by watered down beer in a London pub on a damp wet night, after a bombing raid over Germany. Her description of the Kakoda trail, the mud, the tropical heat and rain, with the expectation of fighting the Japanese brings to life the bestiality of man when at war.
It is not a story of war, but a story of a family caught up in a war. How relationships are made and broken, some deliberate others beyond control of the character. I read the book on a Kindle and after I’d finished, the characters and the locations stuck in my mind for days, even though I was travelling and seeing new places. A well told story.
If you want to discover more about Geoff and his latest book, 'Ice King' check out his website www.geoffwoodland.com
'Ice King' A saga set during the dying days of the African slave trade. 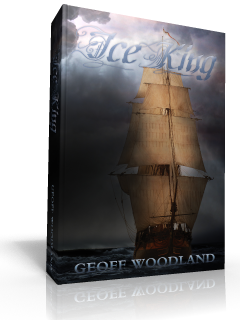