I'd read about mysterious circles in grain crops and decided to write a short story about such a happening.

Coming of Hippolyta won second prize in an Esperance short story competition and was published in ARM, another outlet for creative writers which has stopped publishing.


Madge Kelly went onto the back verandah to empty the teapot on the hydrangea growing in an old tub by the wooden steps. In the darkness, she visualized the plant's lush blue flowers. To her, it was an old friend.
She'd bought the plant as a cutting in a jam tin from a stall in town the year she married Ern. She'd propagated it many times but the parent plant meant more to her than its offspring growing around her garden and in the neighbours' gardens.
She glanced to that part of the evening sky where the planet Venus usually appeared.
Below the planet, another bright star suddenly materialized. Madge thought it was the light of a jet but it moved too fast. To Madge's startled gaze, it grew larger and brighter while she watched and seemed to land beyond the strip of bush in the north paddock.
Ern, her husband, called from the kitchen, "Hurry up, Madge. We're waiting for our tea."
Madge backed away from Venus and tripped over the doorstep into the kitchen. "I think I've just seen a spaceship land."

Read the rest of the story at www.authorsden.com/laurellamperd 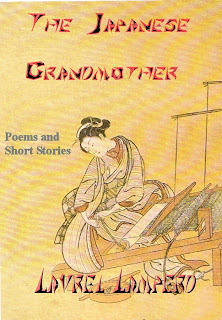 Download The Japanese Grandmother at www.smashwords.com 25% discount during July
Short stories and poetry
Posted by Laurel at 1:34 PM