Many readers have thought this story was part of my family history. But it is fiction. I wrote it because there really were Japanese prostitutes in the small mining community of Western Australia on the edge of the desert country in the early nineteen hundreds. It spurred my imagination.


We were always in awe of our Japanese grandmother, so tiny and delicate in comparison to her great clodhoppers of grandchildren who took after the Australian side of the family. The only thing we inherited from her were our sloe black eyes.
To her grandchildren, she always remained an enigma. "Tell us about where you came from?" we'd beg her.
"I came from Japan," she said, her black eyes smiling.
"But where in Japan?" we'd cry, especially me, who had a greater interest than the others in our family history. "We know grandfather's family here in Melbourne but where is your Japanese family?"
She smiled mysteriously and fluttered a fan made from rice paper in front of her face, using it like a mask as she gazed at us over it, her eyes inscrutable in their darkness.
We tried to guess what grandmother's life might have been in Japan. Had she been a princess or highborn Japanese lady?
One of the younger grandchildren was sure grandmother had been a fairy. We bigger ones scoffed, sending her fleeing to grandmother for comfort.
"If you say I was a fairy, then I must have been," grandmother said. "Look, little one." Grandmother opened her fan with its exotic design. "See the crane contemplating the tree. What is he thinking?"
"He wants to build a nest and lay some eggs," my small cousin said, getting her genders mixed.
Grandmother folded the fan and placed it in my cousin’s chubby hand. "For you, little one." Sixty years later, my cousin still has it.
As we grew older, we queried grandmother's history less, that is, all except me. I suppose it was why grandfather left me the letter to be opened after my grandparents' deaths. He knew I would become an historian.
Read the rest of the story at my website www.authorsden.com/laurellamperd

Download Crossroads at Isca from www.smashwords.com at a discount of 25% during July.
Two British girls meet two young Roman tribunes from the great fort on the plain and their lives are changed forever. 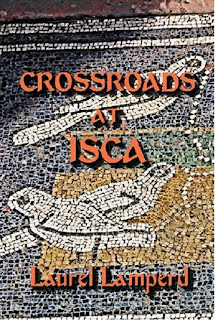