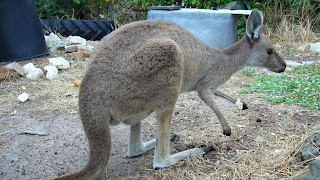 Our pet kangaroo, Daisy, raised from a baby, now returned to the wild.

Felt I had to post this - read it on Kevin Ransom's blog - http://thinkingskull.com

Just saw a post on Facebook and had a moment of clarity. This is what she said:


Just had one of those sad moments. Was talking to one of my old college instructors who I have been friends with since being in their class. Had a disappointing conversation with them. I was basically told I will never become a writer if I self-publish. I know the black mark some of the crap that has come out of self-publish and what it has done to authors and writers. However, I do not feel I am making a mistake and dooming myself to failure by starting that way. I hate that so many people still view Indie and self-publishing in such a negative way and have such a closed mind about it. Makes me want to get published and be successful even more now to prove them wrong!

This is what I replied: [Kevin]


I really hate to say it this way, but when someone old tells you that things will never change, what they’re really saying is that THEY’LL never change. Also, what they’re saying doesn’t make any sense; there are already plenty of success stories in self-publishing. “Never” is very petty word. The next time you see those dinosaurs, gently tell them, “Evolve or die.”

And this my reply

Good website, Kevin. I was interested in your blog about self publishing. Many famous writers in the past have self published. They weren't so lucky as today's writers who can self publish in a wink for virtually no cost. But had to pay for so many hundfeds [maybe] of print copies which they had to hawk around. Cheers
Posted by Laurel at 12:28 PM