The Writer, the Alchemist.

Whether planting characters in a modern romance or trapping them on alien planets,  in prehistoric caves or the Middle Ages, writers create worlds and situations to tell their stories.
Some see themselves as gods.

I see myself as the Alchemist. 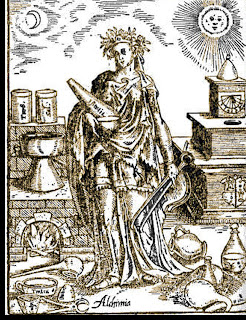 I love symbolism, so it is natural I should gravitate to the art of the ancient alchemists who used physical symbols as metaphors to hide their spiritual philosophies which conflicted with the .
As the alchemist, my aim is to create my Opus Magnum or Great Work, so I focus on their three prime elements: sulphur (fire), mercury (water) and salt (form)
The Alchemist strove to find the right balance between these minerals to produce the sacred elixir (philosopher’s stone) that would transmute base metal into gold and in the process lead him from ignorance to enlightenment. So I strive to do the same.
Ideas bubble and boil in the apparatus in my laboratory. Characters and conflicts fuse into scenes and bake in the self-feeding furnace of my imagination. The result is a jumble of words like chemical experiments. Some work, some don’t, while I seek the sacred elixir, which I call creative juice, to transform chaos into order. To do this I turn to the alchemist’s symbols for direction.
I become sulphur (the Sun), the omnipresent spirit of life. I am mercury, (the Moon – a passive and imperfect reflection of the sun), I am salt (crystals: impure " purified).
A particularly fine idea is that salt symbolizes self-knowledge & wisdom. In its lowest form it is bitter and painful. I love that! So I make my characters suffer as they grow in understanding, but I hope I learn something along the way, too.
As Hermes, the swift messenger (Mercury) and Apollo, patron god of the Arts (Sun) I dissolve or coagulate scenes and characters to my heart’s content. There’s plenty of symbolism here to keep me happy and give my stories form. But I use more.
The alchemist believed the Divine world is reflected in a Material world which is corrupted. Only by removing the imperfections can he reveal the true state of matter and show its perfect union with the Divine. For him, the golden sun, represents the Divine (religion) and the silver moon, represents Matter (science). He saw the marriage of the two in the total solar eclipse. It’s a beautiful concept: 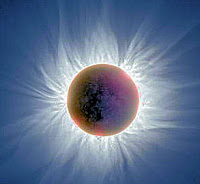 All in One
I try to do the same, by showing both the sacred and secular aspects in everything. Like the self-devouring serpent, the ouroboros, I fuse them together into the circular union of endings and beginnings: goal, crisis, consequence " new goal, crisis etc. 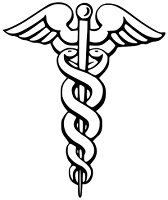 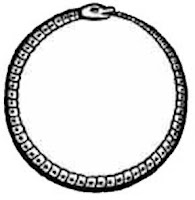 And I must have my staff of Hermes or caduceus wand. This is the symbol of the transforming alchemical power i.e. the transcendence from the profane to the sacred. The union of the two opposing forces in our nature, seen in the coiled snakes rising on the pole. They represent duality – a blending of the positive and negative aspects in my stories.
The Alchemist labours on, dissolving away the imperfections in his metals, trying to purify them so they not only reflect the sun, but reveal Divine Light. Like he who murmurs, ‘Dissolve, dissolve, dissolve,’ I sift through the dross in my chapters, in search of true gold, and delete, delete, delete.
I could spend a lifetime striving and never achieve my lofty goal, but that’s okay. If alchemists had given up, we would have none of their lesser achievements today.
For The Unhewn Stone, I’m indebted to a fictional 14th C. alchemist for handing me his golden orb which
reflects the Divine Light of the Sun. 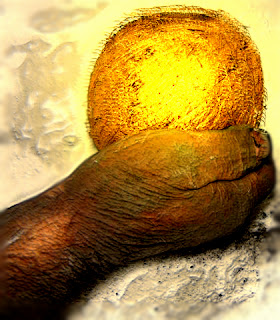