Part of writing any fiction is balancing the crisis, conflict and resolution in each scene/chapter/story. Without a problem to solve, someone getting in the way or a dilemma to overcome there really is no story to tell. The skills and insights the hero/heroine learn while reaching a satisfactory resolution help flesh out the character and show them grow through adversity.

Part of promotion is participating on our publisher's blog. A few weeks ago the topic of discussion was, 'how did your hero/heroine get into this mess'. We hoped to captivate readers and awake interest by showing the crisis we created for our heroes.

To that end... from the epic fantasy series The Chronicles of Caleath: Book ONE EXILED: Autumn's Peril...


How did Caleath get in this mess? 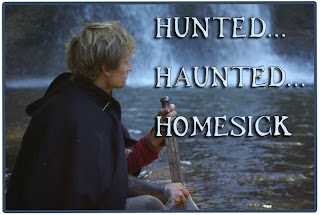 Hi, my name is Gwilt and I am one of Caleath’s traveling companions. I don’t recommend trying to pin him down for an interview, but I can recall a night when he seemed less reticent than usual. I too wanted to know all I could about this stranger to our shores. So I risked asking him some questions concerning his journey. Here is my version of what transpired.
Curious, I asked…

“Where are you going? How is it that you speak our language? Chesney told me you speak all dialects?”

“What is this? Question time?” Caleath sipped the stew I offered. “What did the smith tell you?”

I was grateful light from the lantern left my face in shadow, as Caleath seemed to search for signs of derision. “Mostly he talked about the sinking of the Albatross. Why did you risk falling off the edge of the World? To get here? Why here? There is nothing for you here but more grief. Why do these assassins hunt you?” I paused to gather my breath.

“For starters, there is no edge of the world. This is a planet like so many others, a sphere.” Exasperation seemed to fade as Caleath continued. As though conversation could keep despair at bay, Caleath’s tone mellowed. His attention seemed to focus on appeasing my curiosity. “You can’t fall off this world. That would be too easy.”

“Balls of a hairy goat, I come from another world. Do you think I stepped through a portal? Every star in the sky has the potential to host another world.”

“Why are you here? Did you anger your god?” I probed deeper while my luck held. I could ponder his strange answers later.

“What I did was even worse than that. I defeated a powerful madman in a contest of skills. It was a game. Somehow my success enraged this lunatic into wanting to destroy me.” Caleath paused, as if reluctant to continue. “Death would have been too easy. Ephraim did more than simply destroy me. He has made my life a living hell. Now I find he sold viewing rights to all and sundry. Satellites monitor my every move. You don’t need to understand how, to know it isn’t my idea of fair play.” Caleath pushed away his half-finished stew, bridged his hands and rested his forehead against them before he took a steadying breath.

“I’m sorry,” I sensed my companion’s despair seeped through cracks in an iron will. “You needn’t speak of this if it causes you grief.”

“If it concerned me alone,” Caleath delivered his words as though anger chiseled each syllable from flint. “I could bear the pain. I will seek my revenge, rest assured.” He took a shuddering breath and released it slowly. “It is the others who were innocent and yet have become involved for whom I feel the most anger. Rybolt’s exile was wrong. To die in the name of entertainment is wrong. There have been others, there are still others out there, driven to seek and kill me.”

“All because of a game?”

“It was quite a contest.” Caleath met my disbelief with sadness. A muscle beneath his eye twitched, pulling at the corner of his mouth. Grief leached color from blue eyes and for a moment I looked into gray depths, as tormented as a storm-ridden ocean. I sensed ghosts clamoring beyond the walls of the cottage.

“What sort of a contest?” I recognized a cathartic need in my companion.

“The Game?” Caleath almost smiled. “It was awesome. Virtual realities beyond your wildest imagination uploaded via our implants. Rybolt and I lived for the time we spent in Virtual Reality. It was your basic game of skills. We took on artificial characters and played to the death. Kill or be killed.” Caleath seemed unaware of the trouble I had trying to follow his jargon. For a few moments, his expression relaxed as if remembering his past helped him banish haunting spirits. I listened in awe. “All our opponents were virtual images. No one ever took hurt from the game. No contestant ever shed blood.
“For his plans to succeed Ephraim needed to find an obscure world like yours. One he found in my files. I trained as a surveyor of viable planets. That’s how I know your manner of speech, your landforms, cultures, history. I filed information gathered on hundreds of planets and stored the data on a chip in my head. Ephraim just needed a world he knew would not warrant the Federation’s interest. Gods, one from which escape would be almost impossible.” His voice trailed away.

“That’s right.” Caleath looked into my eyes, as if discovering new energy with a memory of hope. “I am going to get off this rock. I will see Ephraim pay for his evil.”

“To start, I intend staying alive.” Caleath leaned forward. Only a runnel of sweat coursing down his cheek betrayed his angst. Even the ghosts whispering around the hut quieted as Caleath’s conviction gave him strength. “I have a beacon I must find. As long as Ephraim doesn’t know of its location, I have a chance of catching a ride. It will enable me to leave this place. Once free from here, I can work to see Ephraim face justice. If necessary I am prepared to kill him myself and damn Federation rules.”

“I will help you.” My enthusiasm seemed to shock Caleath. “Even if I don’t understand all you tell me.”

“It’s not your fight, Gwilt.” Caleath’s confident attitude appeared to evaporate. His voice grated as if choked by regret. Eyes narrowed and color drained from gleaming cheeks. Beyond the walls, scurrilous ghosts wailed in the cover of encroaching night. “I have said too much.”

“You carry too much grief with you. It weighs on your soul. It is your guilt that allows the dead to plague you.”

“Don’t kid yourself,” Caleath replied. “No, I am not so compassionate. The ghouls are a gift. I told you already, from the lords of dark sorcery.”

“I can feel them, sense their loathing. They hold you responsible for their deaths.”

“They should be free to cross over. The dread lords have bound them to my life force. Every night they come. They would drive me mad but insanity has been out of my reach. The nanobots prevent one from losing one’s mind.”

“Now the nanobots have been destroyed I am afraid I will not cope with their company.”

My hair stood on end when Cyd howled to the moon. As if rejoicing in Caleath’s admission of weakness the spirits circling beyond the sanctuary of light railed with renewed vigor. I recognized genuine gratitude in Caleath’s gaze when he made eye contact.

“I will stay with you. The dead do not frighten me.” I lifted my chin and brandished the wooden spoon. Vengeful ghosts would not touch me.

Caleath’s eyes glinted blue. He shared a wry smile. “You are a braver man than I am, Gwilt.”

“I doubt that!” I changed the subject. “You sailed a ship off the edge of the world.”

“I didn’t think she would sink!” Caleath shook his head. “I might have reconsidered my actions if I had known that.” 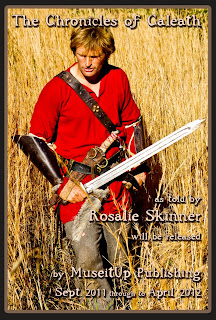 Somehow I don’t think he would have altered his actions. When September comes you too can read his story and decide for yourself.

Posted by Rosalie Skinner at 8:55 AM