They keep dying on me...

A long time ago, I was an author in search of an agent or publisher. Only a writer can truly appreciate the morbid sound of that. Never mind, I had a historical novel on offer and a book of very naughty short stories. So I supported the local Post Office single-handed as I sent out letter after letter. Mostly unanswered, but the few answers I got hinted at my effrontery in approaching the upper tiers of the book trade. Who did I think I was?
And then a break-through. I remember it so well, sitting at my computer and receiving an invitation to submit a manuscript to a London agent. Then I waited, and waited. Eventually, I sent a timid email and was told the agent in question had gone into hospital and was not expected to return to his desk – ever.
Then another break. An American epublisher (they were much rarer then) liked the naughty stories, and would publish them! In two months time! I had made it at last. Six weeks later I received a general email saying the publisher had just been diagnosed with lung cancer and had 6-8 weeks to live. Obviously, publishing my book was not uppermost in his mind.
His wife passed the company on, and my book was released 6 months later and did well. By then I had a second book ready, a tale set in Central Europe (The Prince and the Nun). The new literary editor wrote it was the best thing she had read in decades. She dropped off her perch soon after and never saw it published.
We moved to Australia shortly afterwards, and I decided I really needed to be part of the proper publishing industry. I started sending out letters to Australian agents. Nothing had changed, except the level of condescension. Either that, or my worm-like status had declined even further.
Eventually, a kindly gentleman actually asked for a manuscript! Wow! Home at last. My next communication was not exactly from him. It was from the lady tasked with clearing the effects of the late Mr W...
Well, a plague on them all. As far as I am concerned, the whole tribe of publishers and agents (especially the Australian variety) can go and sit on their ivory towers – and I do mean on. If they are not going to stay alive long enough to publish my books, I will bloody well do it myself.
I can’t say it’s easy, but I now have a little business called Q~Press devoted to publishing MY books. The Q~Press Literary Editor (me) accepts everything I write and compliments me on its amazing quality. I even offer to help other authors with the mysteries of ISBNs, and bar-codes, and formatting etc. In fact everything except publishing. They can use my experience and even the Q~Press name, but when it comes to publishing, they are on their own. I don’t intend letting go of my perch anytime soon. 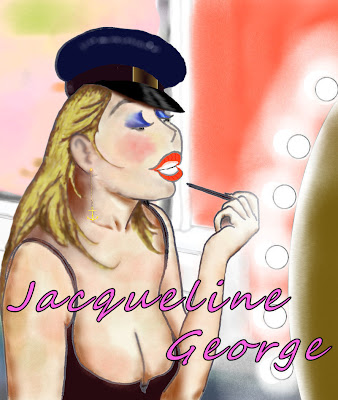 Jacqueline George lives in Cooktown, Far North Queensland. She enjoys the relaxed lifestyle there, and finds plenty of time write books, some of which are far too naughty for her own good.

Posted by Jacqueline at 7:00 PM